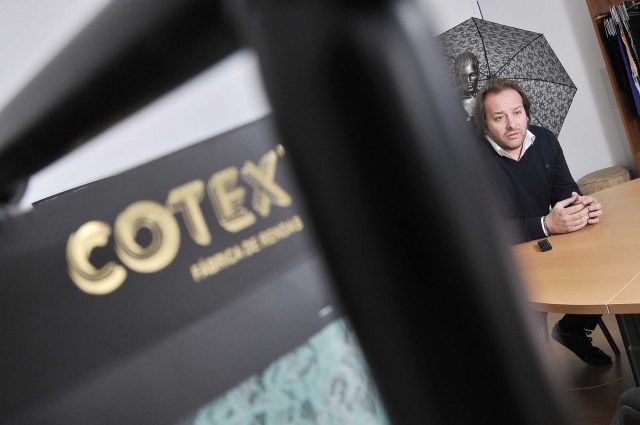 «Cotex was founded by my father [Francisco Cruz] and my grandfather [Francisco Martins], together with two partners, who left meanwhile, all with some experience in lace area, to respond to a gap in the market. And, in a way, it revolutionized lace production in Portugal, both because of the understanding of the product and technological capability», told the administrator Nelson Cruz, the third generation, together with his brother José, leading the business, in Jornal Têxtil’s March’s issue.

The revolution did not stop there and Cotex has reinvented itself to follow “l’air du temps” and customer needs. The void left by the departure of many of the lingerie sector’s clients was filled, with patience and persistence, by major brands and retailers of ready-to-wear – from Zara to Dolce & Gabbana –, which now represent 60% of the sales of the lace producer. «The traditional lingerie market fled the country, I think that even fled Europe because it is a market that consumes large quantities and, therefore, it went to Asia», he stated. «For us, to find another type of market, customers, needs, was a time trial. No doubt that the opening of the Chinese market made a big dent. We lost many clients and few remain, which were able, in one way or another, to adapt and survive, something that very often is missing in companies: to actually realize which way to go», he added.

Therefore, the path made passed by a change in the kind of product made, which is different when working for lingerie or for outerwear. «In outer lace we can use the imagination, use different materials, with very different weights, even in the colour palette, working with the tones of fashion, while the lingerie market is more traditional, the actual range of colours is very limited», explained Nelson Cruz.

The core collection includes about 100 references, with Cotex presenting about 50 new designs per year, which it sells to various customers, from the Inditex group to El Corte Inglés in Spain, also including Portuguese brands like Ana Sousa and many Italian designers and brands, such as Max Mara or Dolce & Gabbana. The company currently exports 20% of its production, a share that has a tendency to grow considering the strong investment that has been made on internationalization. «In the last couple of years we went all over Europe, and beyond, to see where we could fit. We made several fairs in Morocco, Dubai, Tunisia, Lithuania, Italy, Spain, … to realize exactly what trade shows we were interested in doing», lists the administrator, highlighting, among the main markets, Spain (representing 60% to 70 % of exports), Italy, England, France, Holland and Morocco, being the latter «a market that has been growing and begins to be relevant», he said.

With a turnover in 2015 of about 1.3 million euros, Nelson Cruz expects 2016 to be a year of growth, stating that «the ideal would be to reach 1.5 million euros». The same value that the company, which employs 30 people, will invest over the next five years. «Roughly eight years ago, we made a major investment, of around 1.5 million. We are now starting a second phase of investment, with a similar value, to replace and improve our machinery. It’s an investment that is going to start this year and will last for five years», unveiled the administrator.

Growth will also be driven by the market itself, said Nelson Cruz. «One of the things I have said over the past few years is that lace will be increasingly fashionable», he told, pointing out the «excellent quality/price ratio» as a booster for brands to increasingly use lace in their collections. «In the end, lace is another product that designers have at hand, such as silk or prints – it is no longer a product as exclusive as it was. In Cotex we have very different prices to very different markets», added the administrator. «We are at the forefront of what is to make an interesting product, beautiful and with a price component that the customer can buy», he concluded.