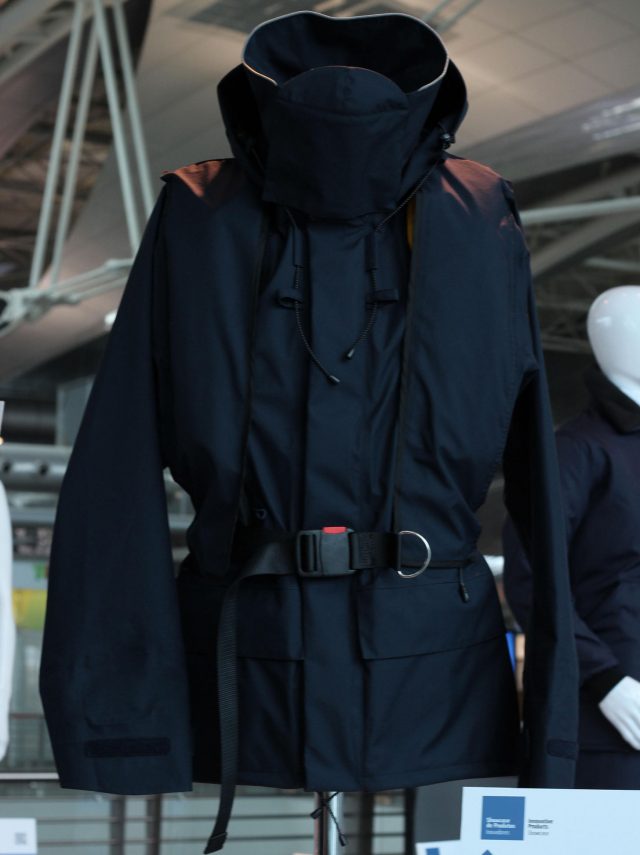 Initially developed to protect the ordinary citizen in the sea environment – namely fisherman and sailing fans –, Sea2B has suffered some mutation to now respond to the specific needs of the military. «We are making several modifications to different activities, always having in mind SeaB2 and the rescuing functionality», explained, in Jornal Têxtil’s March’s issue, Vítor Paiva, manager of the Póvoa de Varzim’s company, which employs 128 people.

Made with a breathable and waterproof fabric, SeaB2 has an automatic insufflation system, reflective bands, a whistle and an emergency light embedded. «It is being customized to each area. For instance, we already included a lower harness so the user might be working in suspension at height more comfortably», pointed out Vítor Paiva.

After being presented in Agência Portuguesa de Defesa, in the European Community and NATO, SeaB2 went to Brussels for another presentation to EDA – European Defence Agency.

Together with SeaB2, which is arriving in the market for sailing and the fishing industry, will also be other products developed by Damel for the military sector. The company, which in 2015 had a turnover of 3.5 million euros, has articles with temperature management and has created a new dolman and pants for the military. «We have developed the fabrics and the styles according with the functionality and the reality of the modern soldier», says the manager. Active camouflage was also part of the project. «We made a camouflage that could adapt to the environment and made the soldier be more imperceptible. It applies a principle of thermal reagents, with inks that reacts to temperature and light», stated.

Although the company’s production – either of fashion articles or technical apparel – has as destination the external markets (99.3%), specially Iceland, Germany, Switzerland, England and France, internationalization and arrive in new countries are a must in Damel’s strategy. «We are now entering in Australia and the US», unveiled Vítor Paiva.

Innovation is not lacking also, mainly because it allows the necessary differentiation. «Sometimes people believe that development is to spend time and money, but lot of the applications that we do in the manufacturing process come from the development», he justifies. It’s the case of «feather articles completely bonded, i.e., 100% waterproof through bonding and not seams. It is an example of the technologies that we develop and now are also applying in several collections», he said.

The company plans, meanwhile, to invest about 360,000 euros in new machines, concluded Vítor Paiva, including testing equipment «that might be an orientation in the developments we are doing».

Joaps Malhas ahead of fashion