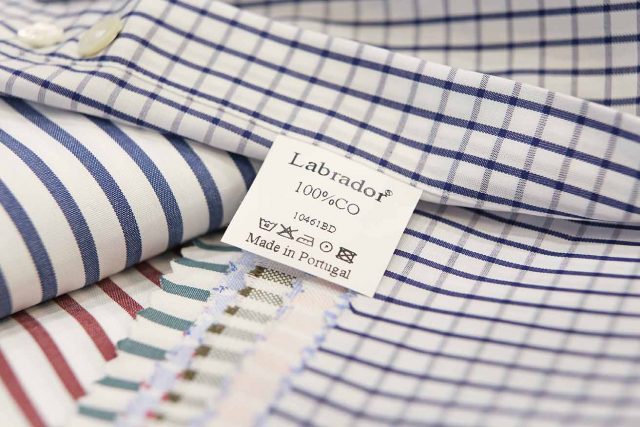 «Labrador is a Portuguese brand, currently with 25 years, that has always distinguished itself by the exclusivity service and attention to the customer. I was myself a customer of the brand and I was surprised with the decision of closing it», starts explaining to Portugal Têxtil José Luís Pinto Basto, who, together with Jorge Mira, partner in the beginning of Labrador, is a shareholder of the company that has the brand today.

The Edge Group core business is real estate, so the apparel sector «is out of the traditional areas» of investment of the group and, «when we were invited by the then BES to bid the brand, we made a cautious offer. We now know that the brand has a superior value to the one we paid, but the truth is that we didn’t expect to win», unveils the CEO.

To José Luís Pinto Basto, the national brand of men apparel and accessories represents «confidence to a demanding consumer that looks for quality and exclusivity», therefor, The Edge Group is rebuilding the original company, starting with the re-opening of the stores in Amoreiras Shopping Center, in Lisbon, in Galerias Península, in Oporto, and more recently, in Shopping Vasco da Gama, in the capital city, last April. The opening of a fourth store in Lisbon is on schedule «still in 2016».

«Our stores are located in privileged locations, near to our target consumer and, naturally, the consume upturn and the regaining of trust of regular customers and new consumers of the brand» have contributed to a «well-succeed» return, says José Luís Pinto Basto, who reminds that Labrador had six stores in national territory before closing. «Since we assumed the brand that we predict in our strategic plan to get back to that store count in Portugal, which we consider to be adequate to satisfy our target consumer», he explains. According to the CEO, each store has an investment around 300,000 euros, «with fit-out construction work, furniture and initial stock».

In the hands of The Edge Group, the backbone of Labrador hasn’t been touched, even because, for the CEO, it wouldn’t justify an intervention in the offer. «Labrador is a premium brand that has always distinguished itself for the service excellence, style and good taste, attention to detail, raw materials’ quality and for being made in Portugal», therefore, «we believe that these characteristics are critical success factors of the brand and, as such, we didn’t made changes, neither to the concept nor to the products», he states to Portugal Têxtil.

In the team, little was altered. Labrador has 30 employees and about 90% are former employees of the brand, «which gives us a great satisfaction», underlines José Luís Pinto Basto, adding that each new store opening «demands a reinforce of the team with 6 to 8 people».

With the quality of apparel manufacturing “made in Portugal” as its strength, fabrics bought in England and Italy, quality cutting, exclusive patterns, a very complete collection, a tailoring service and sewing ateliers, José Luís Pinto Basto considers that Labrador’s pieces can be used both «everyday and special occasions». The brand’s suits have a range of prices between 500 and 600 euros, ties have price tags between 70 and 80 euros and Labrador’s shoes have prices around 200 euros.

After opening its sales points in national territory, Labrador’s future is internationalization. «Our ambition is to take Labrador across borders, even because we believe in the product quality and its capacity of compete with international brands in other markets», recognizes the CEO, although the priority is to «consolidate the brand in the Portuguese market» and the adventure outside borders it is not «a priority in 2016», even though it’s part of Labrador’s strategy for next years. The bet in the international expansion should go through department stores and multi-brand stores, «at least in a first stage».

International trade shows and e-commerce – still in 2016, which represents a 100,000 euros investment – are, also, in the brand’s horizons. «Trade fairs are a good opportunity to present Labrador internationally and to meet the adequate partners to each market», admits José Luís Pinto Basto.