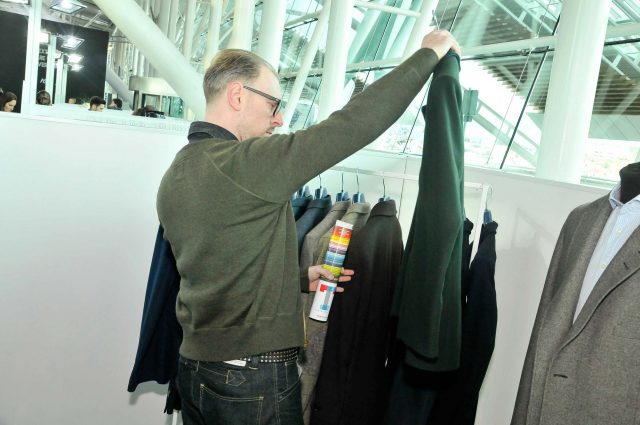 After the loss of the patriarch Alfredo Monteiro, the fate of Lima Azevedo & Gomes was handed over to his wife and children, and now the company is meeting new business branches.

Renowned for the quality of its men’s suits, Lima Azevedo & Gomes is forging closer relations with women’s coats, and in the beginning of 2016, made his first trade show, choosing Modtissimo Airlines as a one-way ticket to a new era. «We want to analyse the results of the trade show and then do one or two abroad», said Carla Monteiro, daughter of the company’s founder, to Jornal Têxtil, in an article published in the April issue.

For some of these stops, Lima Azevedo & Gomes will have to stimulate the growth of its own brand, ACM. «In the future, we must begin by Italy, with the brand, then England and perhaps France», she said, on the participation in international exhibitions.

With a work force that started with 25 people and currently has 75 people and a share of direct export trying to reach 30%, the company is diversifying the sources of its revenues, which in 2015 amounted to 1 million euros. «We started with private label manufacturing and now we are broadening horizons and go for export», stated Carla Monteiro.

The company includes in its clients’ portfolio Portuguese brands, like Decenio and Lion of Porches, but also international ones, such as Pedro del Hierro, Me+Em, Knowledge Cotton Apparel or Hackett. «Hackett is an important client», underlined salesman António Botelho, naming as external markets of the clothing producer Denmark, Sweden, England, Spain, France, Angola and the recent entrance in Asia. «We don’t want to leave private label in the domestic market», said Carla Monteiro, but «2015 was a year of change, private label has decreased and, therefore, the expansion has helped us», stated António Botelho, adding that «in commercial terms it was positive, we have opened doors and we have recovered. Proof of this, in this beginning of 2016 we are doing a trade show».