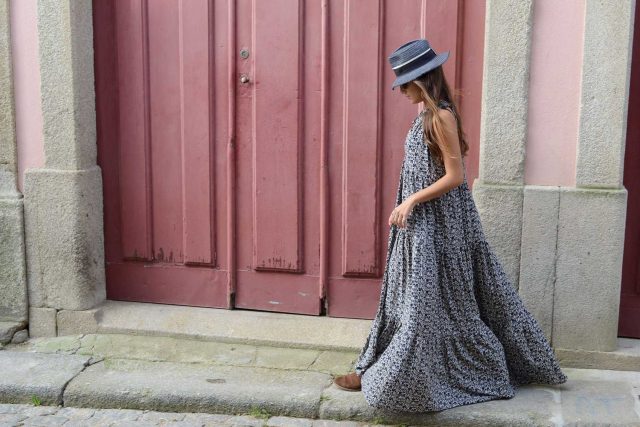 Inspired by vacations in Formentera, Mikonos and Saint Tropez, «on its cool and relaxed side», Mary G World was born in spring-summer 2015 and, since then, is offering feminine and loose dresses, capable of make the transition between different situations «with the right accessories».

«Many times I missed articles that had more to do with my relaxed style, which could be wore in any time. I couldn’t find this offer in other brands that I knew and I have decided to take a chance and to create something to respond to my need, but also because I believed that there were more people like me», recalls Mary G World’s founder to Portugal Têxtil.

The bet in what Mariana Graça presents as a “holiday state of mind”, «a cool vacation attitude, even during winter or when you’re working», is gaining clients beyond national borders, with Spain being the second best market for the brand. «We are also entering the Italian, French and German markets, but with this kind of acceptance, the bet is promising», believes Mary G World’s founder.

Together with online sales through social media, like it happens with a lot of other young Portuguese brands, Mary G World is investing in “little markets” and fashion trade shows to present its offer, being that, in the near future, it will invest in the creation of an online platform for sales, «to give a faster response to the consumer» and a greater focus in international markets «through some partnerships».

Mariana Graça intends to be in «some multi-brand stores in European capitals. Or even in small stores in vacation destinations, like Ibiza, Mikonos, Saint Tropez» because, she says, «it has everything to do with the brand».

For now, Mary G World’s promotion has the contribution of some influencers, like the model Joana Freitas, «who is considered a “It girl” and has many followers in Instagram (most of her followers are from other nationalities), the platform on which I started my sales», in national territory, or Spanish bloggers Silvia Garcia (of the blog “Bartabacmode”) and Maria Tilve (of the blog “Stella Wants to Die”).

The price range from Mary G World’s dresses vary between 70 and 130 euros. «It depends for the style and the material, which includes polyester, linen and embroidered cotton», reveals the founder, who highlights that the selected materials come from Italy, India or China, «but the pieces are entirely produced in the north of Portugal».

«My product is directed to a young woman who wants to differentiate herself from others, using a different garment, but with a distinct style. The brand’s image we try to transmit is also oriented to a market niche and not mass market. To that end, we make only a few pieces of each print/embroidery», adds Mariana Graça.

Like some kind of natural evolution of the limited production of each style, Mary G World – which offers a catalogue of product online in each season and has the embroidered dresses as its bestseller – has recently bet in garment customization.

«This Spring we have launched the possibility to create an ideal dress according to the client’s preference», explains Mariana Graça. The “ideal dress” offer allows to choose one of the styles – shirt-dress, short dress or maxi dress – and, after, to choose among eight available options of prints or embroideries. «Feedback has been incredible!», she reveals to Portugal Têxtil.

Berg ahead of its time