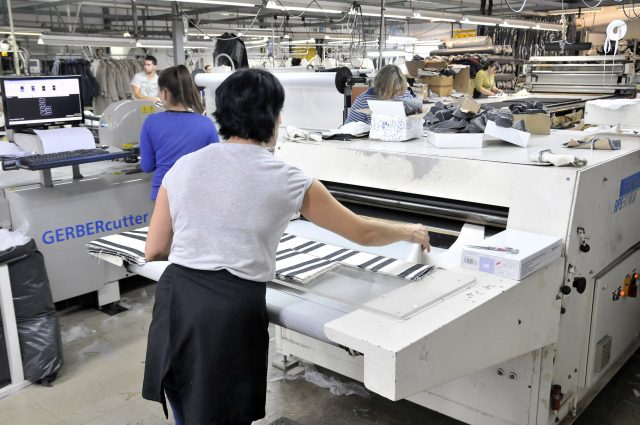 The story of Confecções Manuela & Pereira can be summed up in few lines, but its success has been written already for 35 years. From a small tailor shop, with only 10 people, the company founded by the couple Manuela and Joaquim Pereira has grown to an apparel manufacturing company employing 50 people. Along the way, it left Oporto city centre in favour of the municipality of Baião, about 70 kilometres to the interior of Portugal, where it intends to stay. «It could be anywhere else. But just thinking about layoff around 50 people makes me not even thinking about leaving this place», has confessed Manuela Pereira, in an interview published in January’s issue of Jornal Têxtil.

The concern about human resources is in the centre of Confecções Manuela & Pereira activity. To prove it, the company has a physiotherapist who daily gives advice on posture and contributes to the well-being of the staff. «Apparel manufacturing is a very stressful area and, sometimes, people seem to be angry», explained the founder. «I’ve studied several situations and it came up the physiotherapist. He’s been here for two years now and I think it’s working. He gives posture advices and exercises and already did some massages, for instance, to the ladies on the iron board», she justified.

The same attention is given to each client, where one can find medium-high range brands, such as Filippa K, whether big or not, once the company is also specialized in small series. «We are able to do 30 or 40 pieces – most companies do not accept this kind of orders», she said. The accumulated know-how along the way allows it to make any kind of jacket. «We are today on the market thanks to the fact that we accept any sort of order related to jackets and coats – all kind of product, more difficult or different, our company produces it», assured the managing partner.

Part of the secret is the manufacturing organization, which switched the production in line for cells – a method that allows greater polyvalence and flexibility of the human resources, according to Manuela Pereira. Besides the organization, Confecções Manuela & Pereira spends every year at least 50,000 euros in new technologies, which maintains the apparel manufacturing company updated and automatized, from the pattern production to the automatic cut, as well as the sewing machines. «Even the machines in production are quite automatized so we can better serve the customer, but also to reduce the times», she underlined.

Sewing about 4,000 pieces monthly, Confecções Manuela & Pereira exports directly 30% of all its production, to countries such as Belgium, Spain, Germany and Angola, arriving also, although indirectly, to Sweden, United States, France and England. «The quality we put on the service, meeting deadlines, quality-price and also the quantity of services’ offer, because we offer everything to the client after he send us the design: patterns, collections, production and delivery for shipping» are the biggest assets of the company, which, after growing 30% in 2015, with a turnover of 800,000 euros, wants to achieve a million euros in 2016 and regain the PME Líder status, obtained already in 2014.

Further to the company she leads, Manuela Pereira is also active in the association ANIVEC – Associação Nacional da Indústria de Vestuário e Confecção. «It is important that women become even more a part of the active society, in all situations», she believes, adding that her goal in this engagement is «to represent small companies».

Regarding Confecções Manuela & Pereira, which is about to expand its facilities «to create better conditions to offer a better service to our client», the goals are always reinforce its quality and positive image in the market. «I hope that my company might be recognized by its value, its installed capacity and its way of being in the market», concluded Manuela Pereira.