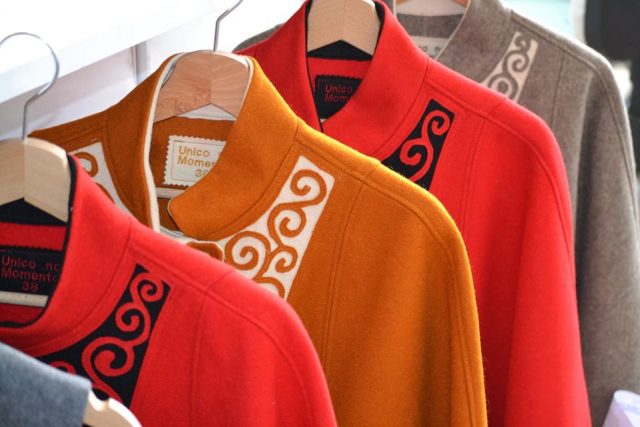 «Initially, we were selling small pieces in cotton, such as key-rings, coin purses and dolls», recalls to Portugal Têxtil Elsa Gonçalves, responsible for the commercial side of Único no Momento, a brand that she manages together with her husband. With the sales increasing and «at the insistence of some friends and clients», the couple started exploring burel, for its «quality and tradition», always from home, «initially small pieces and later on capes, jackets, shorts, vests, home accessories, etc.», she lists.

In 2013, both founders decided it was time to register the brand and to create the website for Único no Momento, a name that came up «in the time and also due to specific orders, customizations in which several ideas happen in that moment». In the following year, Carlos Medeiros has made several craftsmanship’s shows all over the country to promote the brand and for market research.

In 2015, Elsa Gonçalves and Carlos Medeiros felt the necessity of “get out of the house”. «So, we went to a shop in a small mall to make a test», says Elsa Gonçalves. With the conquest of its own space, came the recognition by local authorities, with the participation, responding to an invitation by Montalegre’s municipality, in several craftsmanship fairs, within and out of the borders. A partnership between ADERE-PG and Montalegre’s municipality took, in April, Único no Momento to Greece, to «present some Portuguese craftsmanship projects and to compare the situation of craftsmanship in the participating countries, i.e., Portugal, Greece, Bulgaria, Czech Republic, Croatia, Great-Britain and Italy», reveals Elsa Gonçalves.

In this month of June, the growing pains of Único no Momento have motivated a second move for other facilities, to a more central and visible place, which opened its doors, of course, on the 13th. Because, as the brand’s founder explains, «although many sales are made online, we want to be a “postcard” from Montalegre», a town from Vila Real district, known for celebrate, since 2002, every Friday the 13th.

Baptized Oficina do Burel, the store is joining the online channel and offers everything from pillows to handbags, as well as the traditional capes, in about 50 monthly orders that, besides Portugal, come from countries such as Switzerland, Luxembourg, France and Finland.

«We have the men’s area with jackets, vests and overcoats and some accessories such as cufflinks. Children’s area has embroidered little capes with hoods for girls and overcoats for boys. Women’s area, which is quite vast, includes capes, jackets, vests, skirts, shorts, belts, jewelry and handbags. And there’s also the home section, with lamp shades with burel with several techniques or pillows», states Elsa Gonçalves, who also highlights the partnership with local artisans for developing wool blankets, pieces knitted with pure wool (beanies, leggings, gloves) and “Barrositas” (dolls that try to recreate the apparel used in the north of the country in ancient times) and the baby’s area, with pieces such as pacifier’s rings or diapers, which do not use burel, but still bet on customization. The range price is as vast as the offer, from 1.50 euros for hair clips to 150 euros for a cape.

Even though burel is a mountain kind of material, 100% wool and ideal for bad weather conditions, the brand is overcoming its seasonality with the development of «decoration pieces with burel and baby’s products with cotton, which helps in warm times», as well as women’s accessories, such as handbags and clutchs. However, in summer time, sales don’t fall, «mainly thanks to emigrants and tourists» that visit the town and look for the links that connect or remind them of the region.

The quality of the craftsmanship of Único no Momento make the developed pieces really “museum objects”, with pieces for sale at the Ecomuseu de Barroso, in Montalegre.

«To make the brand grow, as well as its recognition» are two of the future goals of Único no Momento, which has the arrival to the Northern countries and admission of collaborators its next advancements.