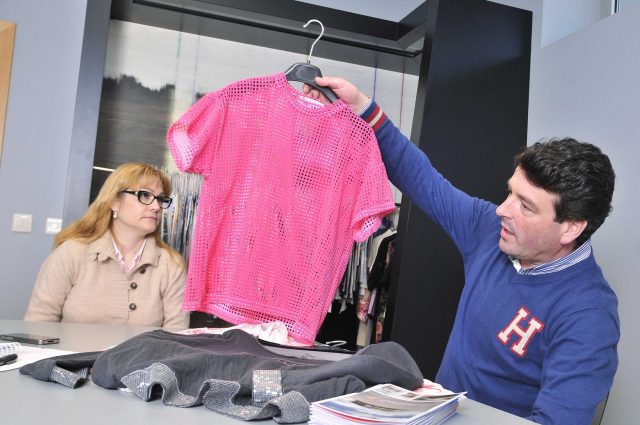 The company founded 11 years ago by the couple Paula Cibrão and Raul Costa has decided to make a new bet, introduced, for the first time, at Première Vision Accessories, in Paris, last February. «We’ve talked to half a dozen companies and each one has prepared a small collection. We have decorated it with our products, marked the prices and now we are going to sell the finished clothing», explained Raul Costa, in an article published in February’s issue of Jornal Têxtil.

Givenchy, Kenzo, Calvin Klein, Karl Lagerfeld, Hugo Boss, Ana Sousa and Ferrache are some of the names with who Com-Prensa works. «Our slogan, which even appears in our invoices, is “Onde a qualidade Com-Pensa” [a pun with the name of the company and the Portuguese word “compensa”, which means compensate, meaning “where quality pays off”]», unveils Paula Cibrão.

Customer service is at the heart of Com-Prensa’s concerns since the first minute, at the time still working from a garage. «We bought a press and we started pressing clients’ transfers. It was just the two of us», tells Paula Cibrão. «Later we started offering also the product and the company started to grow. We have always thought about diversify, having a vast offer for the client and visiting international trade shows to keep us updated», she adds. A strategy that now, assures Raul Costa, allows the company to have little or no competition in the market. «There are companies that do a little of what we do, but we are just like a “citizen shop”: when the client enters, he has everything here», he underscores.

The direct export share still is 6%, although indirectly it rises to a most higher value. France, England and Spain are the main markets of Com-Prensa, which is growing every year. «In 2014 our turnover was 1.45 million euros, this year we only increased 50,000 euros, to 1.5 million euros but in the end of 2016 our goal is growing to 1.7 million euros», says Raul Costa.

To be prepared to this increasing, the company, which employs 38 people, is constantly investing in new technologies – in the last years made investments around 600,000 euros worth. For 2016 and 2017, Com-Prensa is also preparing new investment projects, one of which of 225,000 euros for internationalization, supported by EU funds (Portugal 2020). «We are also preparing a project for innovation, directed to the acquisition of machines and qualification of human resources», unveils Raul Costa.

Sonicarla plays in the anticipation